With more then 25 years experience your Event become an unforgettable experience.

You like to party late into the night or discus at dawn?

We are happy to adjust our opening times at negotiable your wishes. 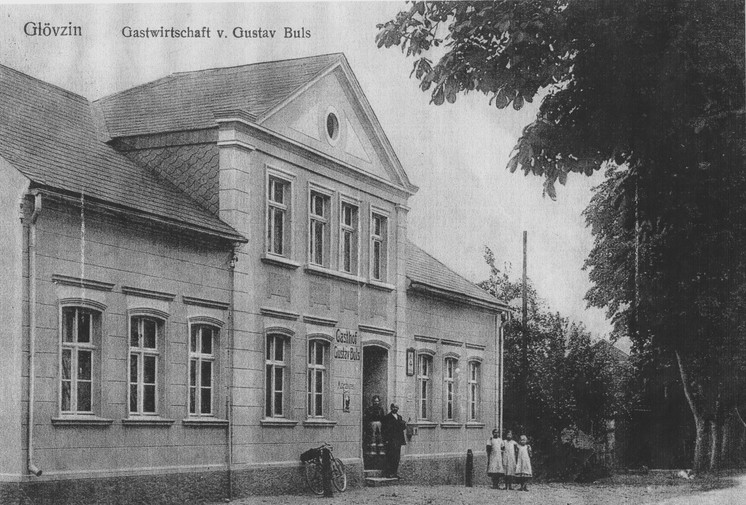 We two brothers Dietmar and Dagobert Dahse sat together on Christmas Eve in 1989 in our parents' living room in Glövzin - a small village in the northwest Brandenburg. We talked about the new exciting time, while we enjoy a glass of cognac.

What happened, we knew; that it does not remain so, we knew; But what does the new time, we didn't know.

From the experience of our family and talks with our parents the decision matured to become independent and to take our destiny into our own hands. So both of us announced our contracts at our facilities, in the spring of 1990 and purchased the consumer restaurant where Dietmar worked since 1981 as innkeeper.

After an extensive renovation, we opened on 8 August 1990 as "Dahses Gasthaus". The former consumer restaurant has become a country hotel, which offers rooms to stay and a room for celebrations, next to the restaurant.

In 1994, we began to develop our family farm with its special atmosphere and gastronomic. on 1 April 1997 we opened our second hotel under the name "Dahses Erbhof". The old cowshed the became a barbecue house "Der Kuhstall"; In the Hayloft modern hotel room; arose. Mothers garden was replaced with a bowling alley. Both the barn and the former shaft barn has been converted into event rooms, which can be used for all kinds of celebrations today.

We are very grateful and pleased with our Mitt workers that our two hotels have experienced from the beginning a great reputation among our guests. We will work with enthusiasm and hard work because you feel good in the future in our homes.

regards, your family and the whole team Dahse

Our ancestors - The history of court

In the 20's of the 19th century, our ancestors were able, thanks to the stone-Hardenberg reforms ransom from the subjection and be as free peasants their fate into their own hands. They have used the time and built over Genrationen away a stately courtyard.

Our father, Werner Dahse, was the last farmer on this farm. When he came home in 1950 from Russian captivity, he took him by his father and led him to the adversities of communist rule defying successfully.

In 1960, Werner Dahse was expropriated by the nationwide collectivization in the GDR and had a member of the newly created agricultural cooperative, known as LPG, are. He could not come to terms with this situation and the related harassment and in 1965 resigned despite the threat of punishment and reprisals from the LPG. he did not get back his yard; also the land, the animals and all the equipment remained in LPG.

The only and most important to him, what he got back, his freedom and his independence. Through the lease of small agricultural areas and the acquisition of cattle he could with his wife Marianne and his four children do farming on a small scale and so bring the farm over time.

On November 9, 1989 the Berlin Wall, the Communist rule was ended and Germany again a united country. By resolution of the LPG we got back our property and all on this farm were grateful that again ruled lawful conditions. Werner Dahse who has never lost faith in a united Germany, which was allowed to experience. In 1992, he wrote to us two sons to court and thus complied with the task of his generation. 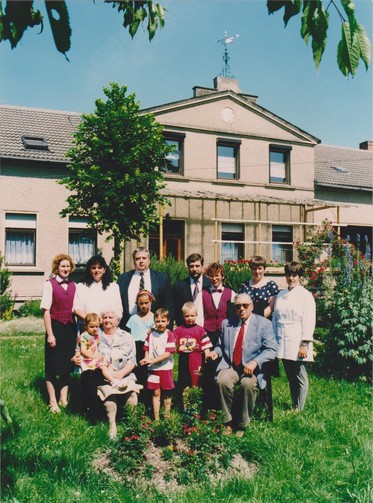 In friendly Gasthaus we offer in addition to the home-style cooking as well as regional Knieper carbon and seasonal such as asparagus or venison. 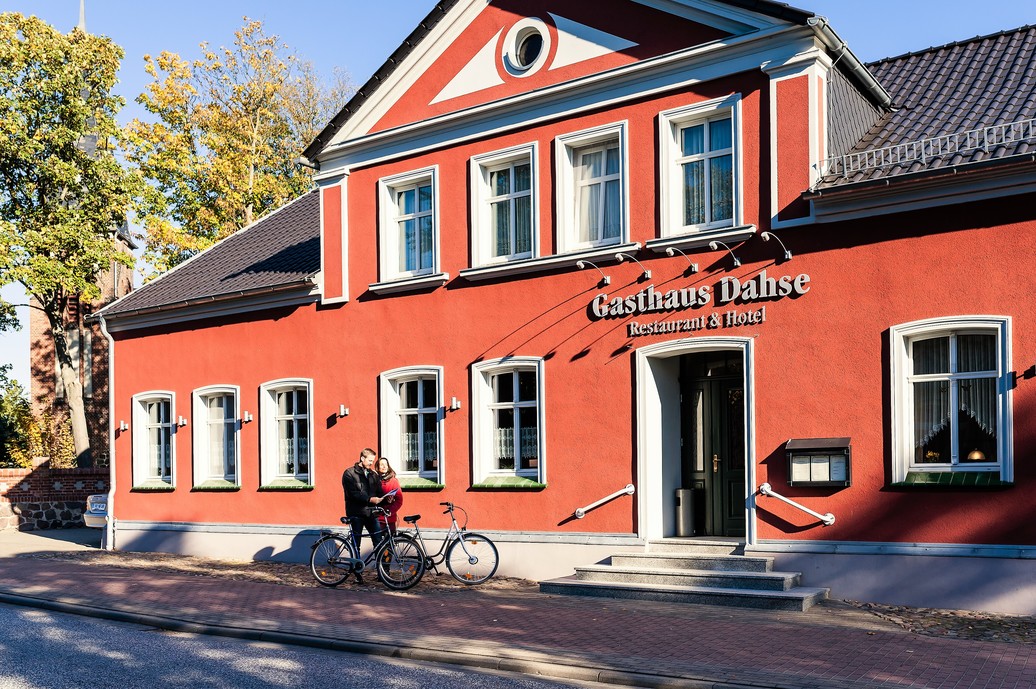 In the renovated restaurant you can enjoy a quick lunch or an extensive dinner with warm food to 21 pm from 11am.

In summer we invite you to a delicious piece of cake with a cup of coffee on the terrace.

A small digestive walk through the more than 750 years old Glövzin with its large farmhouses completed a successful meal and creates a clear head for the onward journey. Those who want to can take this opportunity to 200 meters away Dahses Erbhof view with the restaurant of the barn and look at a typical four-side farm from inside.

The cozy steak restaurant in the former barn of the Erbhof Dahse family enjoys a cozy and rustic atmosphere and can accommodate 80 guests.

Look forward to a delicious steak from the open grill and help yourself at the rich salad buffet. In the summer months our courtyard invites you to linger - be it in the beer garden or under the pleasantly mild canopy of the walnut tree. 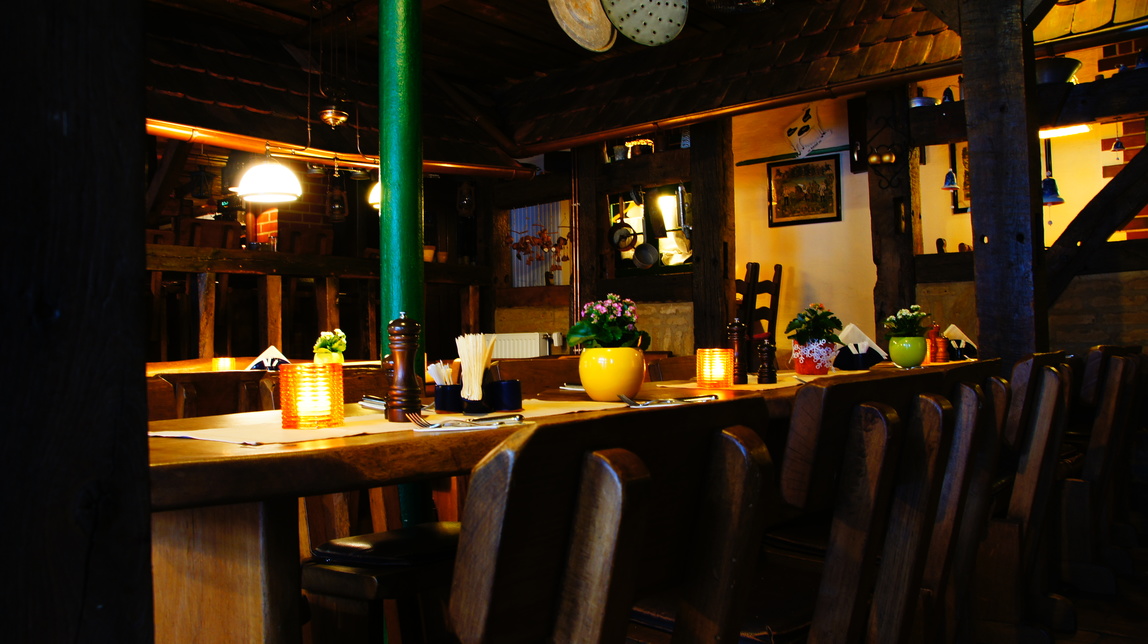 Over 25 years experience in event industry and more then 5.000 bigger and smaller events we have mastered so far.

We offer for every occasion the right location and the desired level of service: from the Baptism in the small frame over the festive wedding with up to 120 guests or brunch 70th birthday up to the company Christmas party with 200 guests.

Our professional team leaves no wish unfulfilled. We are happy to put together an individual offer. We look forward to your call. 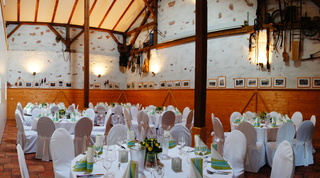 Where once even horse cart full of hay were being unloaded your individual celebration an unforgettable experience today.

In 2005, we rebuilt the barn to the Erbhof a function room with private bar and its own dance floor, without the original charm of the area has been lost.

Thanks to our variable seating will be the character of your event: whether festive with round tables and slipcovers or more formally with long tables and banquet style.

Even with regard to the number of guests, we are flexible, because we build, for example, a desired breakfast in the adjoining conservatory or can open the door of the barn to the fireplace room.

In addition to the barn is the fireplace room, the heart - as the name suggests - a large open fireplace. The room seats up to 35 guests and is perfect for anniversaries, baptisms and confirmations or Jugendweihen.

Also from here is the conservatory available to build, for example, a brunch buffet or to allow a champagne reception overlooking woods and meadows. 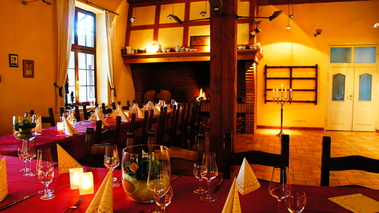 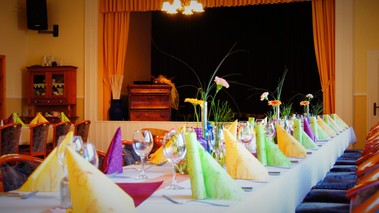 The 200m from the family farm remote inn has a classic room including parquet floor and a small stage, which seats up to 70 guests.

It is also possible to open the doors leading to a beautifully decorated three-window room to create more room for other guests.

For generations, the hall is a popular place to celebrate until dawn or enjoy the delights of the area at lunch during a menu.

Also the inn is the hunting room. Find a separate room with bright walls and understated hunting trophies on the table up to 10 people.

The hunting room offers through its lockable door both intimacy, such as for food within the family and discretion, for example. for Business. 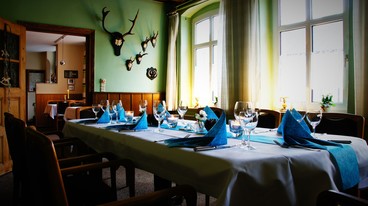 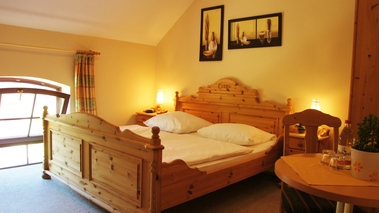 Our cozy and corresponding with the latest standard rooms are spread over two houses. In Dahses inn you are 15 single and double rooms available on Dahses Erbhof see another eleven double rooms.

Our accommodations are firstly an ideal complement for your celebration, which allows the guests with further check-in, late into the evening to celebrate with you. Secondly, our rooms are gladly accepted by business travelers in claim, which we bring forward with free wifi and the possibility of late arrivals and early check-out the flexibility.

But also holidaymakers who stay for several days in the Prignitz, feel in our rooms comfortable.

Enjoy breakfast each morning in the form of a rich buffet, which we have in store from 6 pm.

Our rooms own next to weddings and family celebrations and business meetings. In the barn on the family farm a fixed, big screen with projector allows the framework for a clear presentation.

Our flexibility in seating small meetings of 15 people or large conferences for up to 150 persons can be carried out here and in the adjoining room with fireplace.

Do you need more room for further participants? In Dahses Gasthaus Landhotel 200 meters away is available next to the small hunting room and the great hall.

We provide for lunch you enjoy a sumptuous buffet or serve you afternoon coffee or tea with fresh bread and fruit from the region.

To clear your head itself offers a walk along the fields to the nearby forest or exploring the more than 750 years old Glövzins with its large farms.

Because we value the individual arrival and independence of your guests are almost unlimited parking available which can be used free of charge.

If your event take longer than a day to complete, we accommodate your guests happy and take care of a large number of subscribers to alternative accommodation. 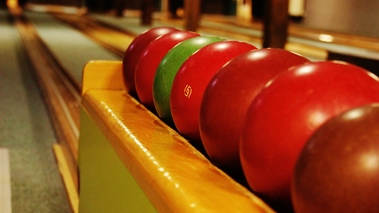 You are into sports before eating?

Or you is more to sport than for food? No problem. On the 4-panel bowling alley of our Erbhof you can really let off steam, be it in the classic version or the newer styles that the connected computer cone suggests. Meanwhile, before or since there is of course the possibility of food and drinks from the restaurant to order the cowshed and eat at the bowling alley. 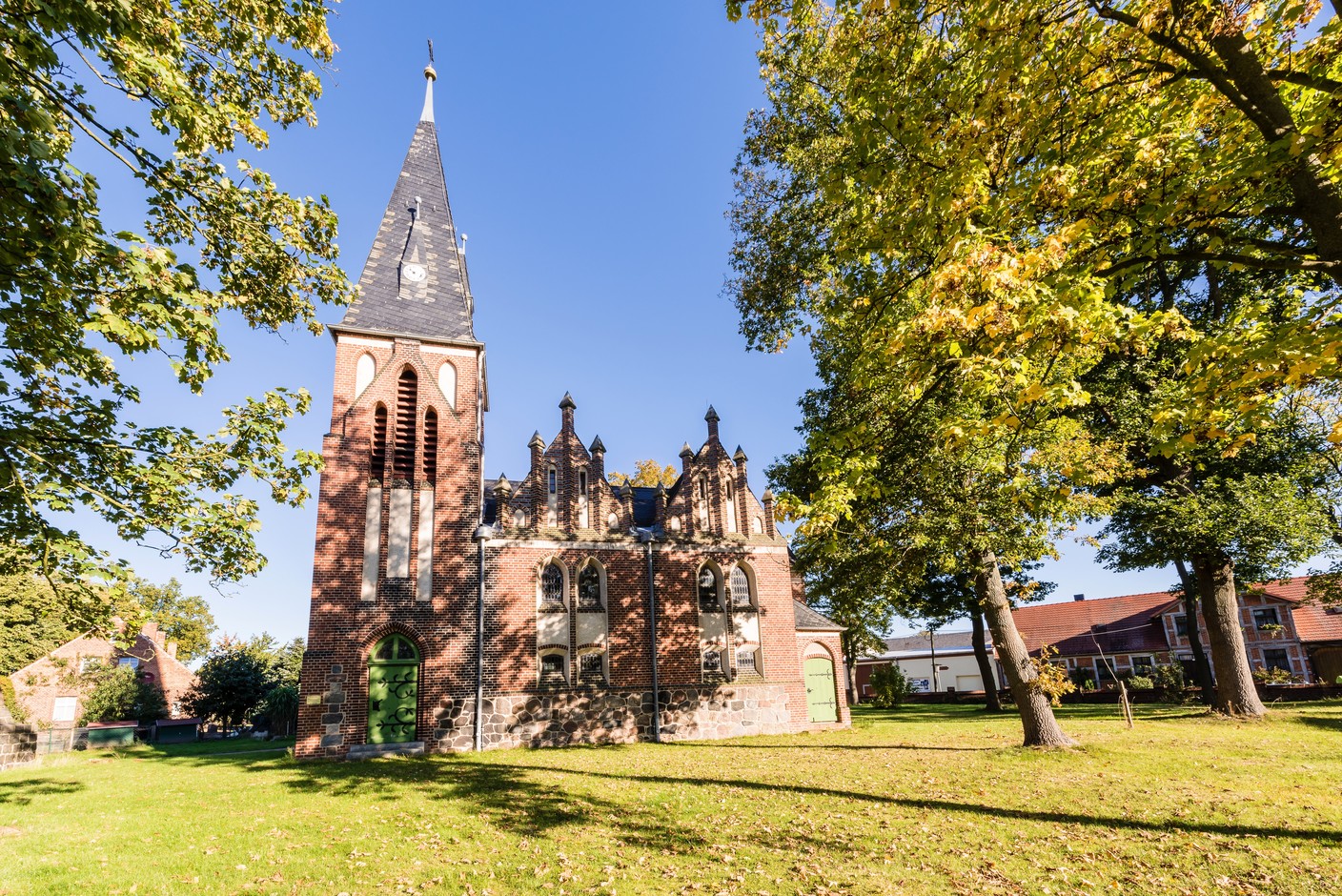 Located halfway between Hamburg and Berlin, the Prignitz primarily offers peace and relaxation away from city crowds. Explore why not cycle through the flat landscape the old stone churches of the farming villages and the former farmhouses of the region or enjoy at a Kremserfahrt the wonderfully unspoilt countryside.

Want to do something more to culture, you can look forward to the many events, the Prignitz summer, such as the medieval spectacle on the plate Castle, Classical in pit castle, the concerts of the Lotte Lehmann week Pearl Mountain or the Elbland Festival Wittenberge.

In addition, the Prignitz is the ideal starting point for day trips north to Schwerin, Rostock, Wismar, Hamburg and Lübeck or south to Neuruppin, Berlin, Potsdam and Magdeburg.

In the evenings you can then spoil you from us and end the day with a cold beer or a glass of wine.

We are happy to put together your own personal package. Call us or contact us. Email We look forward to you. 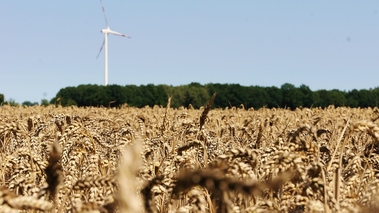 You can find us easily

...from Hamburg
on the B5 via Ludwigslust
or via the A14 motorway Karstädt, direction Perleberg (the highway is not yet universally)

... from Berlin
on the B5 via Nauen - Kyritz - Perleberg
or via A24 departure Pritzwalk

... from Magdeburg
via Stendal - Osterburg - Wittenberge